As mentioned in the previous post, I'm building a Thin Armature Machine for Luckys Tattoo Museum.
The Museum is part of Luckys Tattoo & Medical Supplies which is owned by Jimmy Whitlock.


What's in the name of a Frame:
Whilst looking at the prototype Machines, Jimmy happened to mention that my Frames looked similar to a Bulldog style of Frame.
Strangely enough, it was only from looking through Jimmy's online Tattoo Museum that I'd recently found out that there was an actual name for this style of Frame...you live & learn!!

So I guess these Frames that I'm making are what you'd call an "Aussie" Bulldog.

All of which is kind of ironic because our beloved pet dog was an Aussie Bulldog named Hugo.
Sadly though after 11 years, Hugo is no longer with us.
So if these Aussie Bulldog Frames must have a distinct name to go by, then I'll just call them a "Hugo".

Luckys Museum "Hugo" Machine:
I've managed to make a good start & so have finished hand making the Frame.
All of the current Frames will be stamped with my name followed by the year they've been made, so in this case it reads:  C.CREED 2011

Still need to cut a Top Spring to suit, finish all the assembly, then it's time to do some fine tuning.
As with all my Machines, it will be run as is to allow everything to bed in properly, then measured, stripped down & the Frame will go off to be chrome plated to stop any rusting.
Once back from the Chromers, everything will be reassembled to the previous measurements, tuned & used a number of times to test everything is still all working correctly.
Then it'll be posted off to Jimmy for his Tattoo Museum.

Here's some photos of how it's looking like so far. 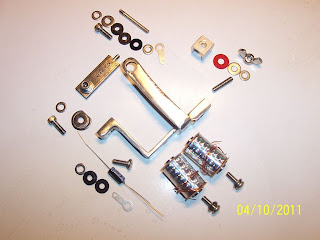 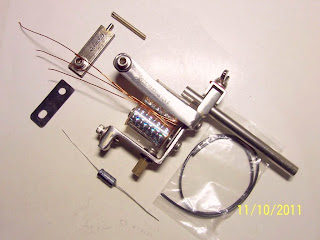