It would seem the more I clean up my old workshop, the more I seem to find old Tattoo related stuff...

Here's something that only an Old Timer would remember seeing or possibly have even used...
...a Tattoo Machine setup to run on low voltage AC (Alternating Current)... 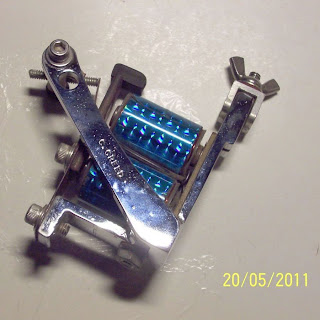 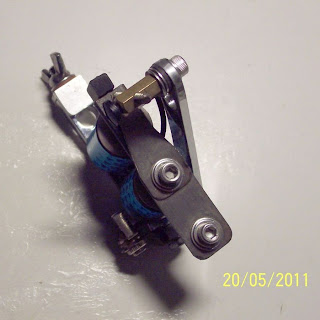 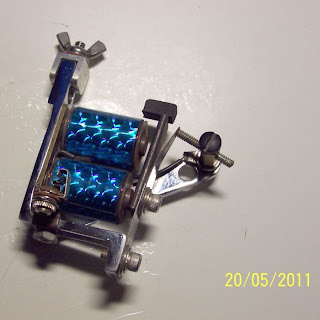 ...and here's one of the "TatPac" AC Power Supplies that I had specifically designed & built to run AC Machines on. 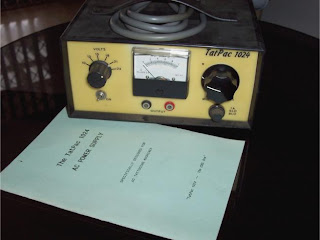 I was originally told that the majority of pre 70's Aussie Tattoo Artists were all using AC Machines, but by the early 70's, most had changed over to just using DC Machines.
I personally know of at least one Old Timer that was still happily using his AC setup into the mid 80's.

Now one of the main problems with using AC Machines was that they'd run extremely hot, in fact so hot that you could actually burn yourself quite badly..!

I can remember being told of how Tattoo Artists would throw these red hot AC Machines into the bucket of water they'd keep beside their chair...
...then they'd use another spare AC Machine until that also got too hot, then fish out the cold one from the bucket..!!

Back in 1990, Dan Robinson Snr ran a Shader/Color AC Machine that he'd use for creating certain kinds of shading effects.
It was also great for packing nice solid Color into skin that was sun hardened & tough like old boot leather.

Dan & I were discussing this old problem of AC Machines running hot & I decided to invest the time & money into having a purpose built AC Power Supply made.

The end result was the "TatPac"...so now we finally had AC Machines that could run cool.

Only a very small number of these Power Supplies were ever made, so if you do happen to see one, then it's a bit of Aussie Tattoo History!!