My Old Machines...the everyday ones

OK, this post is going to be a looong one because there's lots of little things to explain...
...so my apologies for that now!

Read on if you're brave:

As previously mentioned in my first Blog post, I sold everything that was Tattoo related to TonyB.
It's been many years since we'd been in contact & now due to this Blog, we've been able to catch up again.

Here's some photos that form part of the collection of my Old Machines that are now owned by TonyB.
A really Big Thanks goes to TonyB for supplying all of these photos & allowing their use here on the Blog.

TonyB asked if I could possibly provide him with some info & history on each of the Old Machines.
I was happy to oblige, but I will say that some of the Machines did have me racking my brain for answers!
In the pursuit of those answers, one Machine has thrown up an interesting mystery as to it's possible origins...
...so I'll be making a completely separate post dedicated to just that particular Machine later on.

A bit of Aussie history about Machines:
The late 70's saw me start professionally as a Tattoo Artist & so I bought Machines from Wally Hammond.
(see #14 on this list)   (read even more here)
Wally was another legend of the Australian Tattoo scene who owned & operated the first ever professional Tattoo Studio at Kings Cross in Sydney.
Wally also built & supplied his own line of Machines as well as a range of raw Pigment from local sources.
Those Machines came fitted with Thin Armatures because locally that's what was made & used by the majority of Aussie Tattoo Artists.
Those Wally Hammond Machines were later pulled down for spare parts or became Frames for some other Machines that were later sold.
Regrettably they're not part of this collection, but the knowledge they provided me would prove invaluable.
And here's a rough version of what those old Wally Hammond Machines used to look like.

The early 80's saw me buying my first ever set of USA made Machines from one of the well known Tattoo Suppliers.
These Machines came fitted with their standard Armatures, these were referred to as Heavy Armatures by the majority of us who knew the difference.
Machines with a Heavy Armature run completely different to those with Thin Armatures & so I had to learn a whole new way of building, running & the tuning of these Machines.
So by the mid 80's, after constantly trying different ideas, setups & configurations for tuning, I finally had Heavy Armature Machines that worked really well.
By this time, I was now building & tuning Heavy Armature Machines for a number of other Melbourne based Tattoo Artists.
Because of this, I started stocking up on those items that I'd need to do the rebuilds or tuning for others.
The big advantage was the uniformity, inter-changeability & availability of all these parts from various USA Suppliers.

The start of the 90's saw me working for Dan Robinson Snr.
All of Dan's Machines were fitted with Thin Armature, always had been & the quality of his work spoke for itself.
Dan asked "why is it that all you young ones insist on using those slow running pieces of shit?"
He was referring to the Heavy Armatures I had on my Machines.
So Dan gave me a try of his Machines & I noticed immediately the difference between them, Dan's Machines reminded me of those old Wally Machines.
One Tattoo later & I was convinced...I converted my then two Machines into Thin Armature & set about trying to relearn all those old tuning tricks associated with them.
And so I continued using & building Thin Armature Machines right up until I retired in the mid 90's.
Those same USA Machines I'd first bought back in the early 80's went on to become my everyday Machines.

Things to note about these Old Machines:

All of these Old Machines share several things in common.

You'll also notice that they're all fitted with a Plug connection which is a 3.5mm Mono Audio...
...believe me when I say it's far superior to either a Clip Cord or an RCA Plug!!

I'm sure that most of you will notice that the majority of these Machines are pretty rough & rugged looking, especially the ones listed as the "primary or everyday Machines".
As these were constantly in a state of use day in & day out, it meant I couldn't afford to strip them down to be polished & plated until I had a viable replacement for it.
For the majority of my career, I worked with only two Machines & if one failed or broke, I'd then spend all night getting it repaired, tuned & ready for work the next day.
I finally decided to build myself a set of backup Machines that were basically copies of the everyday ones...
...and as with most copies, they never seemed to run quite the same as the original one!

And so those originals just continued to be used, day in & day out...
...it was much more important to produce quality Tattoos than to have "pretty looking" Machines!! 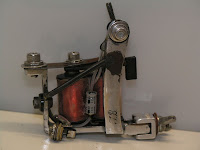 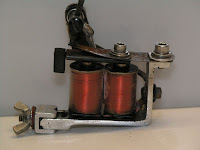 This was my primary or everyday Liner.
Having done a rebuild which included mods to the Frame, it was reassembled just to test run...
...but the old saying "if it runs well, then leave well enough alone" seemed to apply to this Machine!
It always ran so well & consistent that it was almost impossible to consider ever stripping it down. 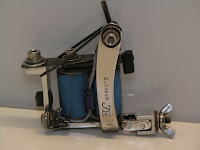 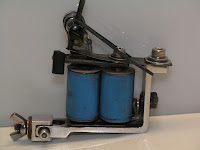 This was my primary or everyday Round Shader.
This Machine was built as a copy (backup Liner) to the one above, but it just ran better as a Shader. 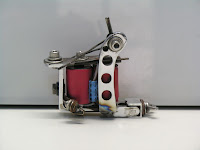 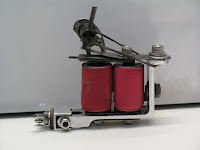 This was my primary or everyday Shader. (now it'd be called my Magnum).
Another of those Machines that always ran consistently well that it never got stripped down. 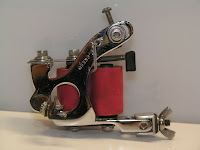 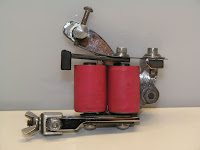 This was my AC (Alternating Current) Shader. (now it'd be called my AC Magnum).
Most old AC Machines usually ran a one piece Spring, so this one was also setup that way.

There'll be more Old Machines in the next post...