It saddens me that there's a whole lot of young Aussie Tattoo Artists who know all about Sailor Jerry...
...but know next to nothing about their very own "Aussie Tattoo Legends"...not even their names..!

Granted, it's not easy finding out about those Old Aussie's Legends, that's mostly because their names, stories, knowledge & history were always "passed on" verbally to the younger ones...
It seems that somewhere along the line, the names of our own Legends stopped being mentioned?

I post the following in an effort to get some of those old Aussie Tattoo Legends recognised & remembered.
My hope is that these names will once again grace the lips of the current generation of Aussie Tattoo Artists, without being followed by the question..."who's that??"


A blast from the past:
Had a very good friend & Tattoo Artist come to visit & to also pick up their finished Machines.
They'd brought along a few old cast Frames belonging to Dan Robinson Snr, for me to check out.

Talk about a "blast from the past"...I instantly recognised both of these Frames!!

So I took the opportunity to grab some photos of these old Frames & now I "pass on" their info...


Dan (Robbo) Robinson Snr "Logie" Frame:
When I worked for Dan at Highline Tattooing in St. Kilda, he was getting his Frame designs cast at a small Foundry just down the road from the Studio.
Dan would get me to pick up the raw castings & I'd drop them off to him at his home.
So that "Logie" Frame was one of those designs I was picking up & dropping off to him.

Kevin Coppin "Swing-Gate" Frame:
This particular Kevin Coppin Frame has a very different story attached to it.
Back in the late 80's, Kevin gave me an old mould he had for doing this particular Frame design.
Apparently there was a problem with it & as I used to be a Jeweller, he figured I'd be able to sort it out.
So the first thing I did was to get one cast in Brass, that way I could see where & what the problem was??
I did managed to get it all filed, but unfortunately life got in the way & this project got pushed aside.
In the 90's I gave this Frame to Dan, as he had a few ideas & wanted to have a play with it.
So 20 + years later, the very same Frame shows up at my place, exactly as I'd given it to Dan..!

It's kind of funny how "Life" does things like that...

Posted by Colin Creed Machines at 10:14 am No comments:

I'd mentioned in a previous Blog post that I still had to build some "Aussie Old School" Machines.
Part of this included a 3.5mm Audio Socket & required a Bracket to suit these Jolly Frames.

Well here's those last two Machines, now all run-in & finished, ready to go off to their new homes. 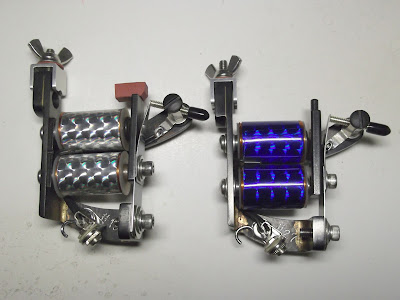 Posted by Colin Creed Machines at 9:02 am No comments:

A huge Thanks needs to go to the guys at Eternal Ink for the running-in of all these Machines.
They are Justin, Rochey & Gary.

With a number of Orders having both Liners & Magnums, it's allowed the guys the option of using a big Tattoo to run-in 2 x Machines.

With the majority of these Jolly Machines now run-in, they're being posted off to their "new homes".

Posted by Colin Creed Machines at 9:40 am No comments: