In an earlier Blog post, I made mention of "one Machine having thrown up an interesting mystery as to it's possible origins"...
Well that particular Machine was the very first that I ever owned & was bought from Chris "Spider" Webb.
And so over the years I've always referred to it as my "Webb Machine".

Below are photos of how the Webb Machine currently looks. (Thanks again to TonyB for these photos)
It should be noted that I modified & rebuilt this Machine a number of times since 1975.
Unfortunately there's no photos of how it originally looked when it was first purchased from Chris Webb.
(it originally looked like the "Sailor Jerry" versions but mine had a set of round Bobbin Coils) 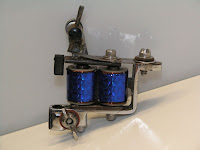 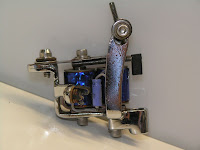 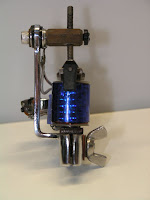 This Machine was used as my Round Shader or sometimes if needed, my Big Needle Liner. (also as a backup Liner)
Over the years this Machine went through quite a number of different setups & configurations.
At one stage it was setup to run as my primary or everyday Liner.
The Frame was modified in a number of ways to suit my requirements & the needs of those different setups.
The original old round Bobbin Coils were replaced during a total rebuild in the early 1990's with a set of "Shorty" versions.
During that same rebuild the Frame was sent off to be chrome plated, but not polished.

My association with this Machine:
I originally bought this Machine from Chris for the grand sum of $20.00 which was almost half my weekly wage as an apprentice Jeweller back in 1975.
The purchase price included a Liner Tube, a Round Shader Tube as well as a Needle Bar.
The Frame was hand fabricated from flat mild steel strap & had some form of Blackening to protect it from rusting.
This Machine was fitted with handmade round Bobbin style Coils. (alas no longer in the present Machine)
Chris told me that it was a Machine he'd been given by Des Connolly, who was another of Melbourne's Tattoo Artists.

The history of this Machine:
As stated above, this Machine had originally come from Des Connolly.
Des was a Pattern Maker by trade & created the patterns needed by Foundries to cast various items in metal.
Chris's knowledge on building Machines was highly respected & so Des would give Machines to Chris for appraisal, others for Chris to test & keep.
From what I understood at the time, my Machine was one of those that Chris had tested & kept.

And that's about where I'd thought the history for this "Webb Machine" started & ended...
...that is until recently looking through some Tattoo Museum websites with old Tattoo Machines in them.
I'm now wondering if there's a bigger mystery as to it's true origin going by some of the photos I've now found at these various sites??

Questions about this Machine:
Des knew Sailor Jerry quite well & they both corresponded with each other swapping ideas, designs, Pigment & Machines.
A number of those Machines that they traded back & forth were prototypes, testers or working concepts.
Having only recently seen photos of the Machines owned & used by Sailor Jerry, there's a remarkable similarity between them & the original Webb Machine.

I do know that Des was casting iron Frames here in Australia for Jerry back in the very early 70's.
So I can only speculate that prior to his death in 1973, Jerry possibly sent a Machine to Des, that later was given to Chris & then onto me? *
Another possibility is that Des was the one making these particular Machines & had given them to both Jerry & Chris to test & use??

Unfortunately I've no real way of confirming either of these suspicions, as Des Connolly died in 1985.
There's a chance that Chris Webb may know the true story, but I lost contact with him many years ago.
Hopefully someone reading this Blog post might be able provide more info..?
...my research on this will continue...
Update 2022:   CASE SOLVED
A recent visit to my old tattoo mate & fellow Machine Builder, Steve Paul has shed more light on this particular Machine.
Based on correspondence between Des & Jerry, it now turns out that Alf Mingins was also heavily involved with these particular Machines.
Both Alf & Jerry were part of an "exchange of ideas" involving a particular "E" Coil & Thin Armature Machine being made by Alf & Des then shared with Jerry for his input.
(this now accounts for "why" the Jerry Machines had features & screw threads NOT normally being used by American Builders)
Several of Alf's old Machines are now part of Brett Stewart's Australian Tattoo Museum.
Brett has made a number of posts to his Facebook & Instagram Pages showing Alf's Machines & they feature the "E" Coil but their Frames are identical to how mine was originally.
Happy to say this is:  CASE SOLVED 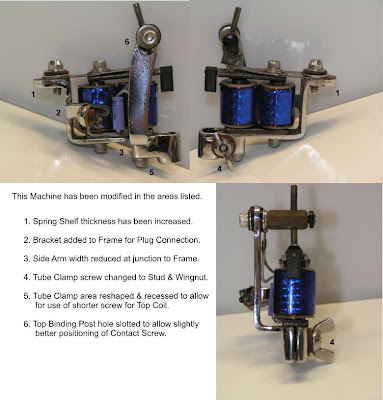 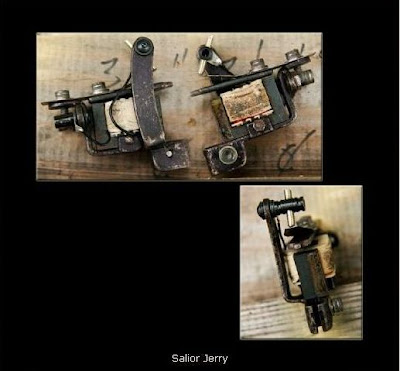 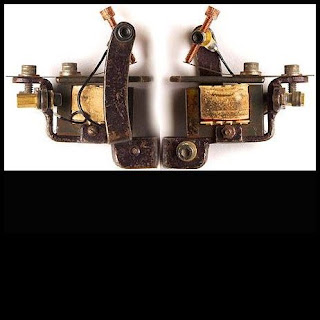 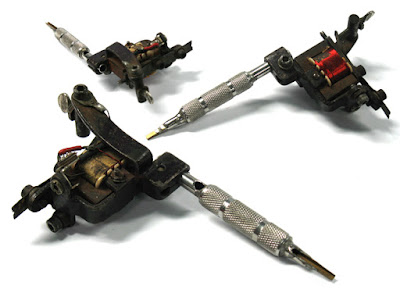