When I first started out to build this Machine, I set myself a deadline for it to be all finished...
...ideally the first week of November or the second week at the very latest!!

So first thing tomorrow morning (Monday 14th November), this Luckys Museum "Hugo" Machine is off to it's new home at Luckys Tattoo Museum in the States.

In the last Blog post, this Machine had just been fine tuned & tested on myself, leaving only the running in process to be completed.
The running in was already well under way, with a large tattoo already completed & a full arm sleeve being outlined with it, when Murphy's Law struck...
...a broken Top Spring & it was exactly what had previously happened to the Magnum prototype.
Given that it was from that very same batch of Spring material, I decided to totally change the Top & Back Springs to a different, but already proven material that I'd only just acquired.

Of course that meant I now had to redo all the fine tuning & testing again, then repeat the measuring, to be followed by the strip down, then chrome plating, etc...
...my deadline was now fast running out..!


Utilise those resources that are close to you:
Where I'm building all of these Machines is at a factory owned & operated by some friends, one of them is a young guy named Anthony who's a Spray Painter.
Whilst discussing how this Machine build was progressing, Anthony suggested he could spray paint the Frame & thus regain me some of the already lost time.
Anthony chose to use a super tough paint that when dry, is totally impervious to any solvents, most of which wouldn't ever be used within a Tattoo Studio anyway!!
Anthony also chose to use a Clear, so that it could always be seen how this Machine was constructed & that it was totally hand built.
So a really Big Thanks goes to Anthony.

With the Frame all nicely painted & rock hard, I moved straight into the reassembly & then retuning.
This was followed by some quick tests on my foot again, just to be sure that everything was working well.
The final result, a voltage range from 10V through to 11.5V & drawing no more than 0.31A.


This Machine pretty much represents what I'd managed to learn as an Aussie Tattoo Artist, if you wanted to do Tattooing, you had to make the majority of equipment & components yourself.
So figured it was only fitting that I should also hand make a one piece Tube with a replaceable Tip.
I've not made this actual Grip, but had a number of them produced to how I used to make them myself, which includes the 3 grooves at the Tip end to identify my Tubes & Grips when working with other Tattoo Artists.


A quick trip down Memory Lane:
Next on my agenda was to get this Machine safely packaged & ready for postage to the States.
I started thinking about forms of packaging which included Bubble-wrap & other such things.
Whilst contemplating all this, my thoughts wandered back to the old days of seeing the Aussie Old Timers with Gladstone Bags & their Machines safely wrapped up inside...
...their Machines were always safely wrapped up within an old tea towel.
It's something of which I still do to this day when transporting the prototype Machines back & forth for testing to Eternal Ink.

So I thought it was kind of fitting to ship this "Old Style" Machine wrapped up in an "Old School" way...
...in this case it's a typical Aussie Tourist one. 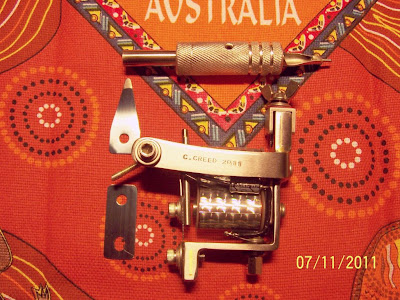